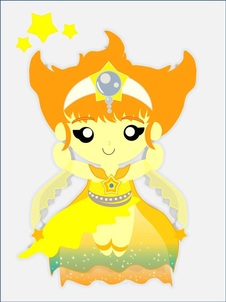 Asteria- Goddess of the Stars
Asteria is young and naive, and also in charge of one of the most important elements of the sky. Although she has learned a lot from Selene, her inexperience and good heart will be her downfall in leading to various events in Zodiac's main story. 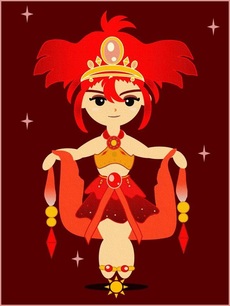 Heliades- Goddess of the Sun
As the Daughter of Helios, she has a large burden on her shoulders. She is in charge of raising and lowering the sun and has inherited the chariot of fire. Instead of horses however, she rides with her Pheonix. She is determined to show her father she can do his job right but can also be a little cocky. 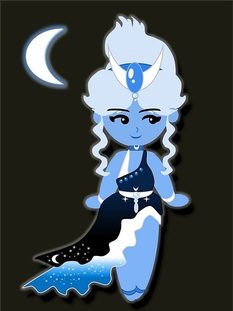 Selene- Goddess of the Moon
The most experience and wise of the three Goddesses of the Sky, Selene acts as a mother figure to Asteria and Heliades. She watches over Heliades while her father is away, and trains Asteria to spread stars throughout the sky. Her Primary job is to raise and lower the Moon. She is quiet and gentle, but takes her jobs very seriously. 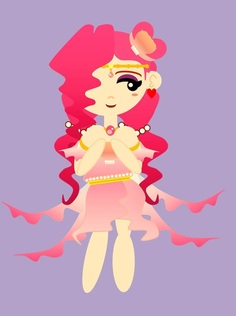 Aphrodite- Goddess of Love
Aphrodite is blessed with beauty and love. Although she appears to be lustful in appearance, she is quite shy and timid. Aphrodite's love is what is called upon to help Zelene when anyone is in danger. 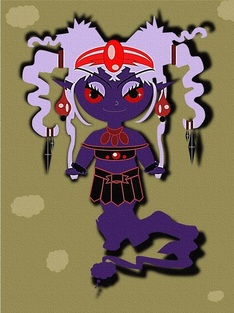 Strife- Goddess of Mischief
Strife is a dark goddess who uses her charm and manipulation to trick others and gets great joy and satisfaction from it. She craves a world where she can do this all the time, so she tricks Asteria and hides all the stars in the sky. In this way, she can live in eternal chaos and darkness. She resides on the dark bottoms of clouds in the sky. 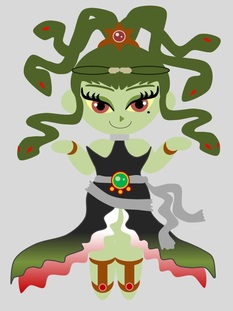 Medusa- Diety asked by Strife to hinder the girls plans to return the stars on earth. Her snake hair is pulled into a pony tail and she has the ability to turn people to stone with one glance. She can also take control of snakes using her hair and cause paralysis. 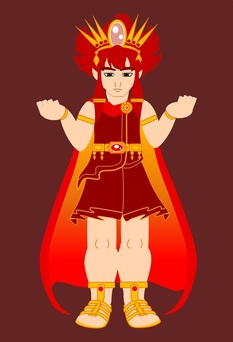 Helios- God of the Sun
Helios is in charge of raising and lowering the Sun, working side by side with his sister Selene who controls the Moon. He is called away to help Apollo, the God of Light to unionize their powers and make the days last longer for the coming seasons. While away, he entrusts his daughter Heliades to control the sun for him and prove she is ready to inherit his fire stallions and chariot. 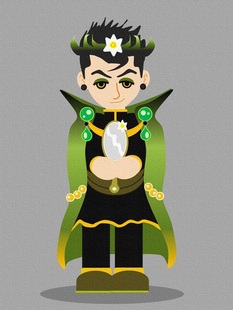 Narcissus- Son of Cephissus
Narcissus is egotistical, loves himself and cannot go without his mirror which he bestowed with magic to whomever looked into it would turn ugly and disfigured. If his mirror were to break he too would suffer the curse he left upon the person who would look into the glass. Strife promises him eternal self beauty if he manages to disable the girls. 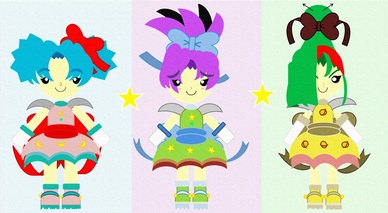 Miah, Danika and Zelene - The Girls chosen by the Goddesses
These three girls opened the ancient Zodiac Book and have been transported to the world of the Gods. The sky Goddesses read this as a sign for help and bestow upon them their remaining magic to hunt down and retrieve the missing stars to stop Strife. Although they are all very different, they must work together or suffer living in a dark and chaotic world.
Powered by